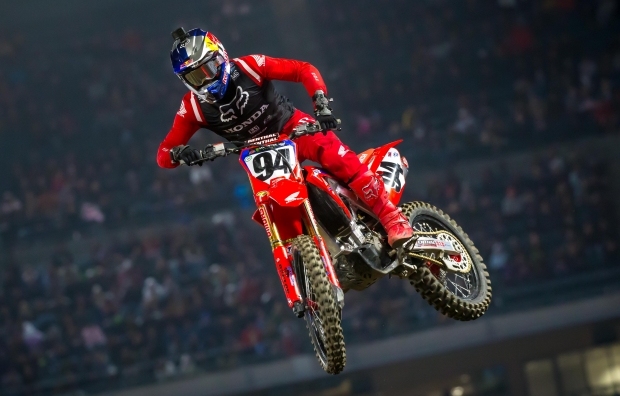 One week after his emotional St. Louis win, Team Honda HRC’s Ken Roczen turned in another impressive performance aboard his CRF450R. During round three of the AMA Supercross series, in its second and final stop to Anaheim’s Angel Stadium, he scored a strong second-place result and assumed an early lead in the title chase.

Once again, Roczen started the night on a strong note, battling to a win in his heat race. When the gate fell on the main event, the German impressed everyone, rocketing down the start straight with the holeshot and early lead. He opened a small gap on the rest of the field but as the race progressed his struggles in the whoops caused him to come under fire from Eli Tomac. At the 13-minute mark, Roczen relinquished the lead, but he continued to lay down solid laps and took the checkered flag in second.

Teammate Justin Brayton once again showed notable speed, finishing seventh. Brayton got off to a less-than-desirable start, sitting 11thafter the completion of the opening lap. He swiftly began working his way forward, progressing to eighth on lap three. He struggled to get around another rider for much of the race, but finally made a move on lap 11 to take over seventh, which is where he finished.

“My night was pretty good. I had a good battle with Adam [Cianciarulo] in the heat race, which was fun and good to come away with the win. That put me in a good position for the main event and to be able to pick a decent gate. Tonight though, pretty much every gate on the start was super rough and there were a lot of holes, so it was hard to decide which one to pick. But I hooked up really good and got my first holeshot of the year, so that was nice. We’ve been putting in a lot of work on my starts, so it’s been paying off. For me to be able to win tonight, I had to be a lot better in the whoops. I was just struggling there the entire race, so that didn’t help me out; I feel like I lost all my time there. I was trying to skim them, then went to jumping them, which was horrible too; I lost a lot of ground so went back to skimming and just was all over the place and that was where Eli [Tomac] made up a lot of time and closed in on me. We definitely have some work to do but don't want to get too crazy. We just need to keep doing what we’re doing. We’re in a good spot right now and we just have to keep it up. First last weekend and second this weekend, plus the red plate is really great. I’m really happy.”

I’m pretty happy with how the race went tonight. A little bummed after the heat race after getting the holeshot but crashing in the first turn, which set me up for a bad gate pick for the main. That’s pretty crucial now with how bad the ruts get outside the gate, but I was able to start around 11th or 12th and pass my way up to seventh. At the middle of the race, I was actually one of the fastest guys on the track. With a better track position, I definitely think I could end up on the podium. Overall a really good night, and although the first three rounds have gone well, I’m looking forward to improving and getting into the top five.”

“There are a lot of positives to take away from tonight. Ken’s starts were solid and he was able to grab another heat-race win. He’s been putting a lot of work and emphasis on his starts during the week so I think it’s showing. He rode strong in the main, getting some more laps up front and then finishing second. To come away with red plate is great. It was also a solid night for Justin. He got a good start in his heat race but unfortunately went down in the first turn. He was still able to get up and get into a transfer spot. In the main, he also put together good laps to finish seventh. We’ve still got some work to do for both guys but I think we’re in a good spot overall.”

“I’m really happy coming away with a second place tonight. Ken got a great start but was struggling a bit so fell back to second. It was really good to hold on to second because Cooper [Webb] was pushing hard there at the end, but Ken dug deep and finished strong. We ended up with the red plate too, so overall it’s good. Bike-wise, Ken was on the same setup from St. Louis. We did make some small adjustments throughout the day but nothing too drastic. He struggled in the whoops again but both these Anaheim tracks have been really tough. We’ll work on it and try to get him more comfortable there. It’s early but I think we’re in a good spot for the duration of the series. Ken had a ride tonight that he might not be super-pumped about, but in my mind it was a championship ride. He was struggling but still hunkered down and got it done. I think 10 weeks down the road, he’ll look back and be proud of this ride. If we can continue to be consistent and put in some good results, we’ll hopefully put a cushion on the lead.” 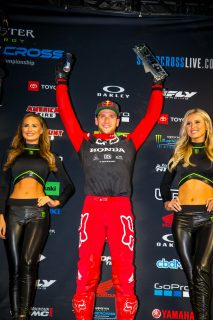 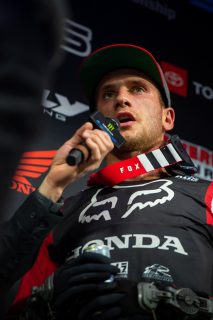 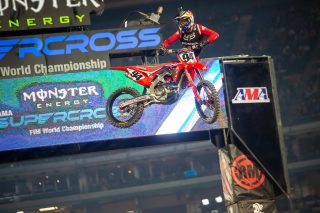 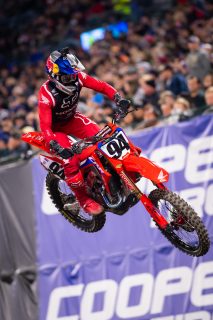 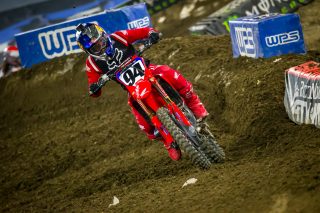 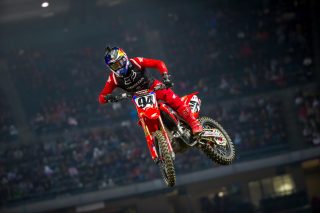 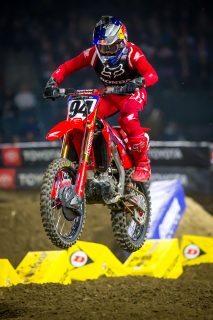 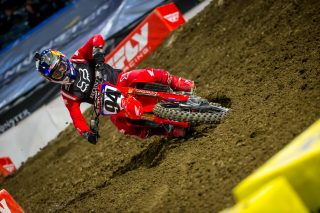 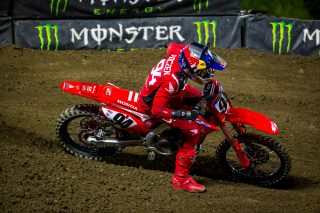 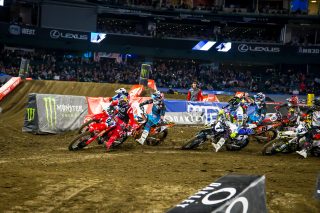 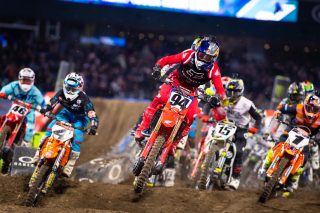 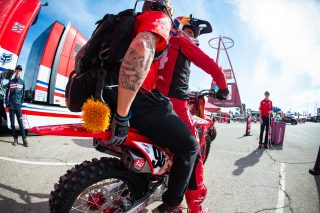 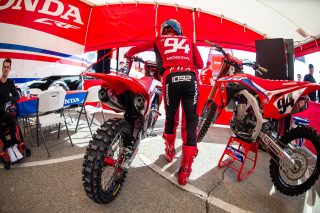 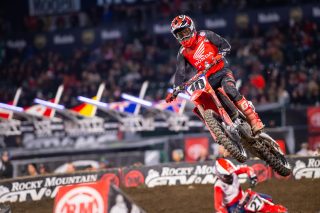 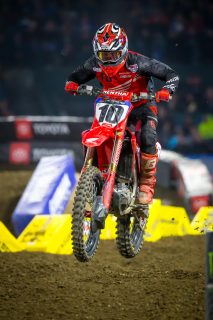 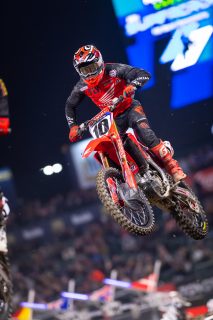 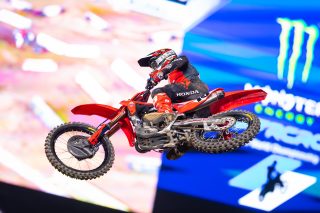 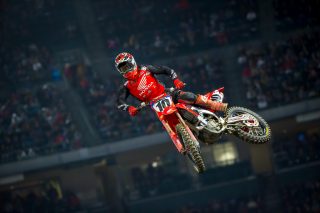 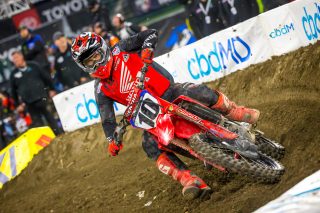 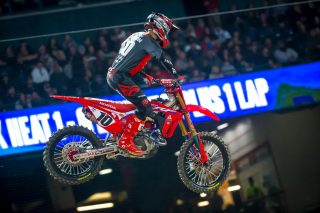 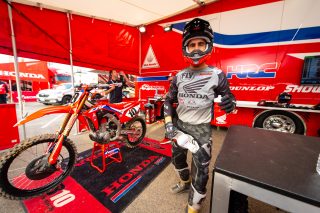 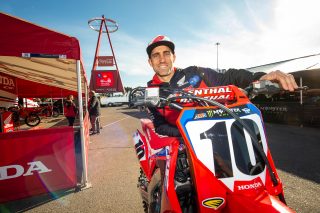 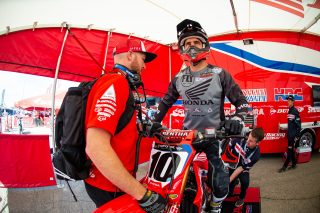 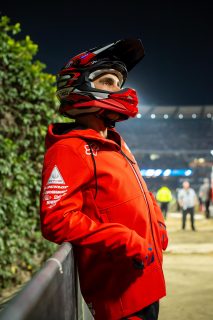 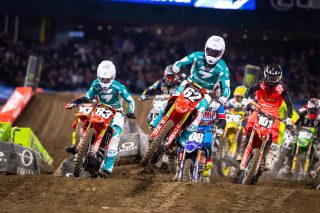 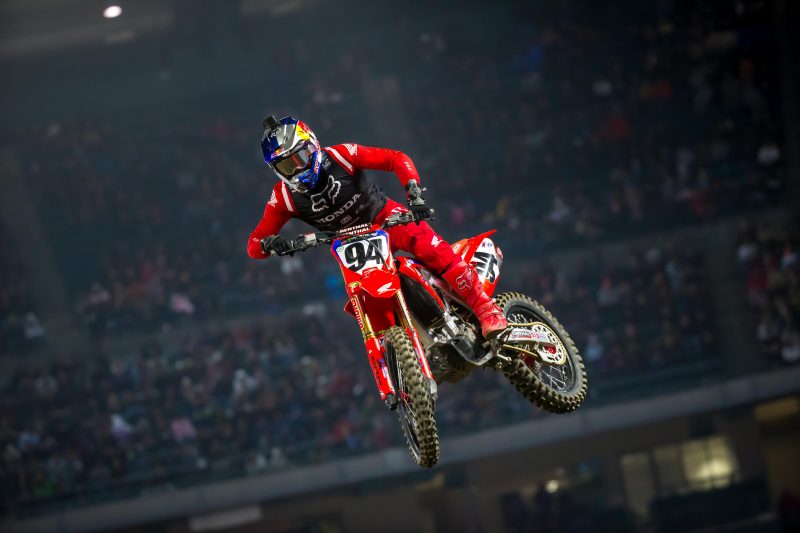