In an emotional evening in St. Louis, Team Honda HRC’s Ken Roczen put together an impeccable ride at round two of the AMA Supercross series, leading 23 of the 24 laps raced to score his first main-event victory since the January 14, 2017, San Diego race. Having overcome two nearly career-ending injuries, Roczen demonstrated his unrelenting drive as he returned to the top of the podium in dominant fashion. The German was strong throughout the entire night program, taking the win in his heat race before grabbing a second-place start in the main event. He made a strong pass for the lead on lap two and never looked back, riding unchallenged for the remainder of the 20-minute-plus-one-lap race.

It was a hectic evening for teammate Justin Brayton, who was forced to qualify into the main event via the Last Chance Qualifier. Despite having the far outside gate position, the veteran made the best of the situation, launching his CRF450R to a top-10 start and working his way into fifth, where he stayed for the early portion of the race. He ultimately relinquished three positions, taking the checkered flag in eighth.

“This feels so surreal and is absolutely amazing. It’s been a long time coming with a lot of struggle in the process, so this is definitely one of the sweetest moments of my career. The emotions and joy from everyone is very special. I think tonight was just our night to win. The whole day was good, starting with feeling so much more comfortable on the bike than I did last week. We also grabbed a couple of solid starts in both races tonight. I rode really good in the heat race and even in the main. I’d say that I actually surprised myself and maybe the team a little with how the main event went; it was just our time to shine. I knew if I wanted to make it happen, I’d need to make my way to the front fast, so that’s what I did. I got around Zach [Osborne] quick and had a clear track, so then I just clicked off some great laps, putting a gap between myself and the field. At one point Justin [Barcia] seemed to close in a bit but I just focused on hitting my marks and managing my pace. The race felt really long because the lap times were fairly short; the tower was right after the finish so I could get a glance at the clock each lap—it seemed like it took forever! I’ve messed it up so many times in the last laps, so it’s not over until it’s actually over. I just tried to maintain a pace while also staying consistent and not making any mistakes. We’re going to enjoy this but then get back to work this week. This is a big confidence booster and really motivating for me to want to keep the momentum going.”

“Definitely a wild night. I never want to go to the LCQ, but I actually enjoyed it a bit. Under those circumstances, you just try to make the best of it and it was kind of nice to get out there and win it, plus get to ride the track so close to the main event. I hope I don’t have to go to another one though! I’m super proud of the team to be able to get me back out there. Main event-wise, I was still able to get a pretty good start from the far outside gate. I ran inside the top 10 for the whole race, finishing eighth, which isn’t where I would like to be by any means but still an overall good start to the season with the adversity both weekends. Hopefully another cleaner weekend next week at A2 and I’m really hoping to be in the top five, then build up to some podium finishes.”

“It was an awesome night for Ken and the team. He really needed this and I think it’s going to carry his confidence even further. I think the biggest takeaway is that Ken is leaving here knowing he can still win. He’s always been confident in his capabilities but now actually having accomplished what he’s been fighting for, really solidifies it. We have to give credit to the whole team too. Everyone worked really hard last week after Anaheim to help get him a little more comfortable on the bike. Justin had some good highlights throughout the night but also some things we need to work out. Unfortunately, we had some issues, which sent him to the LCQ, but I think the whole situation shows the professionalism of the team, that when we’re in a pinch, we’ve got some really talented people that can get the job done and make it happen. I mean, a motor swap in 20 minutes, that’s incredibly impressive! We still have some work to do and aren’t going to get ahead of ourselves, but getting this win tonight is incredibly special for everyone involved.”

“This weekend was awesome. I think everyone had a lot of skepticism and questions after Ken’s performance last weekend in Anaheim, so to come out tonight and get the win the way he did was great. Big credit to Ken and the team for just putting our heads down, trying not to get too panicked after one race, realizing this is a long season and spending long days at the test track in Corona to get the package that we came here today with. We didn’t mess with the bike a whole lot this weekend, just a few clicks here and there to account for the softer dirt conditions, but overall, he was much happier. Ken had a great attitude and mindset all day, and I really think it came down to him just wanting to get it done and his desire to win. We also really focused on starts this week and I think that showed tonight because we had good starts in the heat and main.” 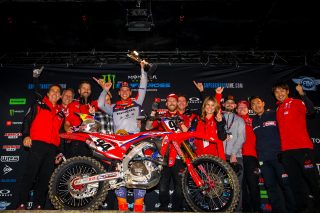 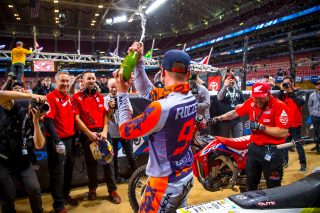 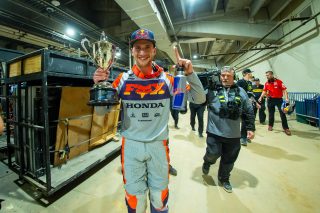 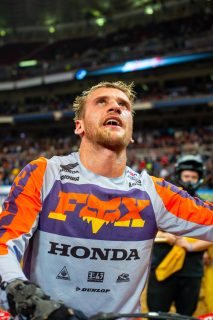 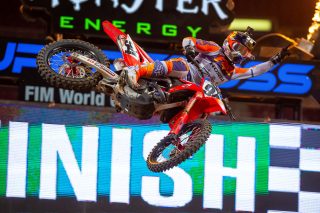 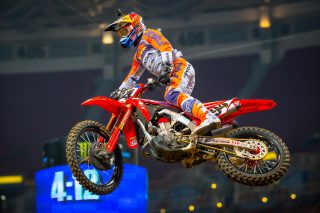 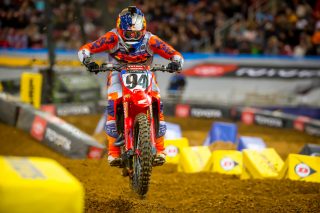 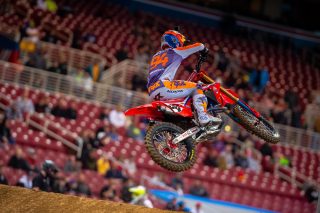 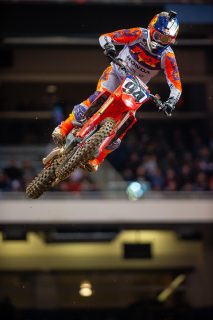 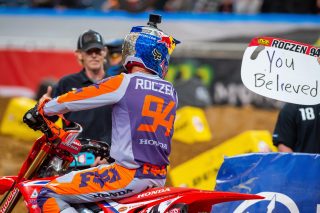 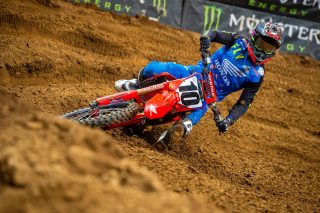 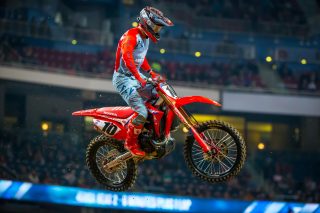 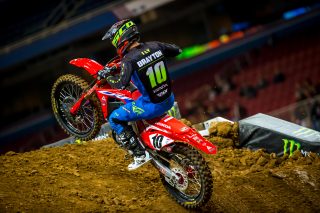 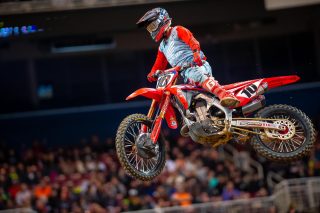 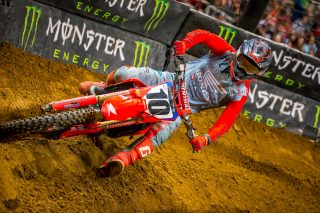 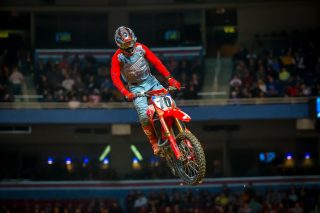 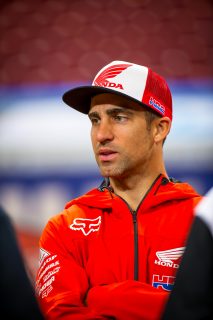 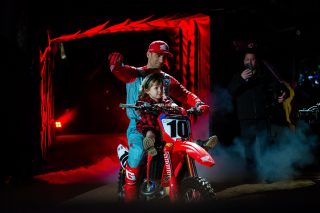 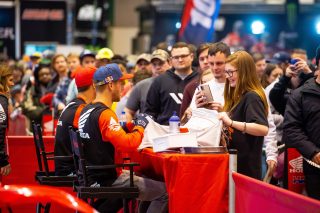 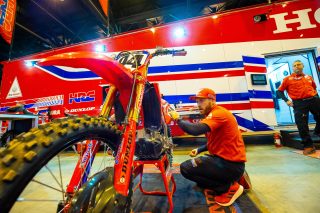 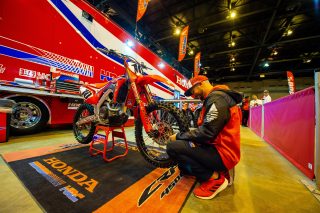 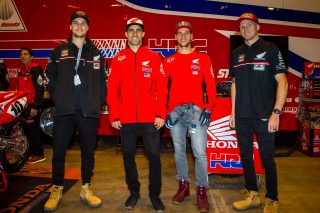 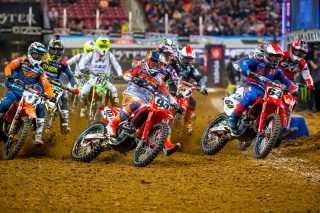 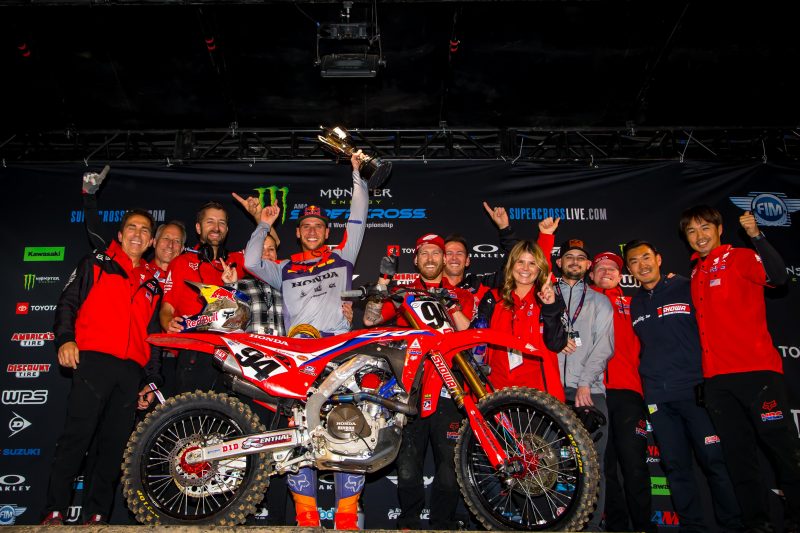