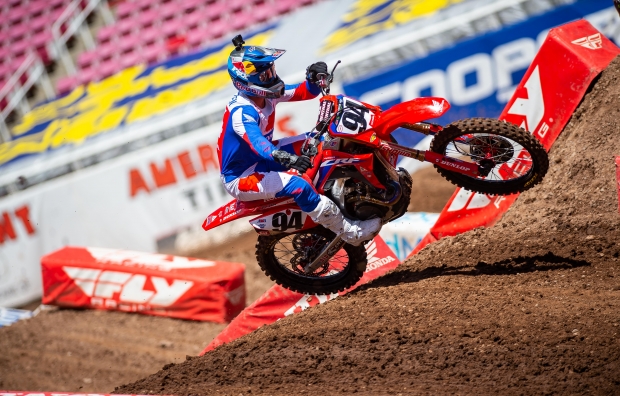 Team Honda HRC’s Ken Roczen posted a fourth-place result at the 2020 AMA Supercross series’ penultimate event, held—like the previous five races—at Salt Lake City’s Rice-Eccles Stadium. The German enjoyed a decent start in the 450SX main event, completing lap one in fifth place. He advanced a position on the next lap and then another spot on lap six to sit third, where he spent some time before slipping a position on lap 17 of 29, and that’s where he rode for the remainder. The result relegated Roczen to third in the series standings, six points behind second.

Roczen’s teammate Justin Brayton enjoyed a great ride aboard his CRF450R, running in second place early on. He rode well for the entire event, matching his best result of the year by finishing sixth.

The series finale is set to run at the same venue this Sunday.

●    With only two off days between races, the Team Honda HRC crew spent most of their time at the stadium, prepping the bikes for Wednesday’s race, though several took time for some cycling. Meanwhile, riders and families spent time outdoors.

●    Salt Lake City experienced cooler weather following the previous race, with rainfall Tuesday evening, and the round 16 schedule was revised Wednesday morning due to wet track conditions. Free practice was eliminated completely, and the first qualifiers were pushed back almost an hour.

●    The evening program for round 16 was identical to that of the two previous events, kicking off at 5 p.m. local time, with riders getting a decent break between each class’s second heat race and its LCQ. Additionally, pre-stage and staging procedures were the same as at round 15.

●    The track layout was similar to Sunday’s race, with the start gate retaining its location on one side of the stadium floor. The whoops section and finish were in the same locations as before.

●    Most teams’ personnel and riders continued to follow all COVID-19-related rules and procedures. Though no further testing is required for those who have remained in Utah, final testing will be available on Friday for anyone who left the state or recently arrived for the final round.

●    On Monday afternoon, several riders including Brayton participated in a Feld-organized media session that took place via Zoom. The riders’ meeting for round 16 took place Tuesday evening, again by Zoom, and was recorded for subsequent posting on YouTube. The post-race press conference took place via Zoom one hour after the main event, and select riders are scheduled to participate in an additional virtual media scrum Friday afternoon.

●    Both Team Honda HRC riders were slotted in the second heat race, and although Roczen came out of turn one with the lead, he was bumped wide by Jason Anderson in turn two, forcing him to mount a come-from-behind charge to seventh, one ahead of his teammate. Hill was fifth, with his Smartop/Bullfrog Spas/MotoConcepts teammate Vince Friese advancing to the main from ninth. In heat one, Stewart was the top Red Rider, with a fifth-place result.

●    Chase Sexton took an important step toward a successful defense of his 250SX East title with a flawless performance on Wednesday. After topping his heat race, the GEICO Honda rider nailed a strong start in the main, then put a hard lap-five pass on title-rival Shane Mcelrath to assume the lead. Sexton immediately built a comfortable margin and rode comfortably to the victory, stretching his margin to six points with only the final East/West Showdown remaining. Also riding well was Sexton’s teammate Jo Shimoda, the rookie scoring his best finish with a fifth–one ahead of Phoenix Racing Honda’s Kyle Peters. FXR/Chaparral Honda’s Chris Blose was eighth, and Manluk Racing’s Chase Marquier also made the top 10.

“The second-to-last race in Salt Lake City was a good one. I’d rather have it this way and put in a hard effort and not be good enough and get beat than have too many issues and drop off completely. I just wasn’t fast enough tonight. I tried really hard to at least get on the podium, and we were close, but just not enough, unfortunately. We put in a good charge. We’re going to come back in the last race and try to get to the very top step one last time for 2020. Overall, it was a very good effort from the team and on my side, especially after a heat race where I got parked because I had a big rut in my line and didn’t have the greatest gate pick. We put in a good fight and ended up fourth for the night. It’s not exactly the result we wanted in the end, but it was a great fight and that’s all we can ask for.”

“This was the best one yet for me. I had a great start in the main and ran second for a while. I was running up front and doing the laps that I wanted to do, running good lap times, racing with the guys I feel like I should be racing with. I’m pretty proud of this one. Sixth isn’t amazing, but overall from what I’ve been doing—starting 13th or 14th and coming to eighth, it’s much better to start second and run there for a while and get used to that pace again, then get passed by a few of the best guys in the world and end up sixth. Overall it was a good night for me. One to go—let’s do it!”

“JB had a much better day all day, building some confidence, getting better starts, running up front where he knows he’s got the speed to run. He finally got a good start in the main event and put a good race together. Ken rode really well too. His start wasn’t quite as good, but he rode hard the whole time. I know he’s putting out a lot of effort right now, with everything that’s been going on. I think he had a really solid ride the whole main event, and now we’re taking it to the last race”

“Not a bad day here in Salt Lake City. Ken had decent qualifying. The track was a little bit sticky with the late schedule, but it was still a good day. We had a little bump on the track in the heat race, and it was tough to make up time there, so we had a bad gate pick. We had a pretty decent start in the main event. We latched onto Cooper [Webb] but just came up a couple seconds short. We’ll try again Sunday.” 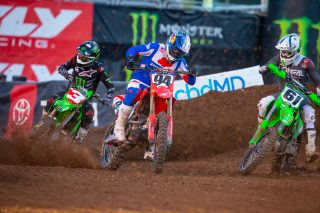 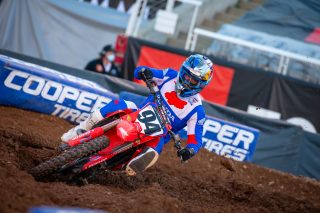 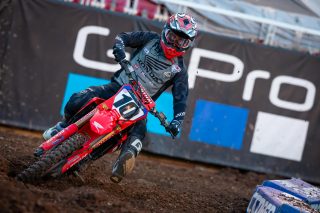 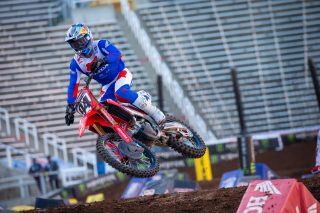 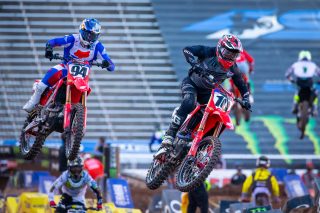 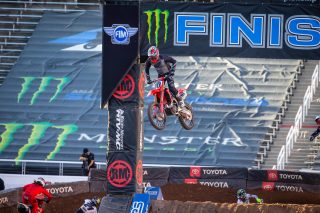 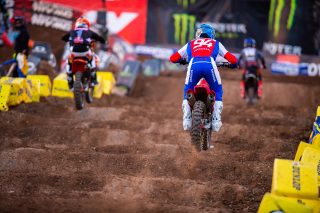 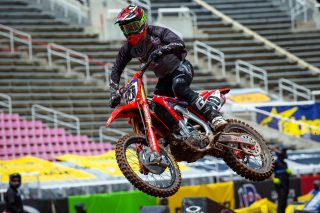 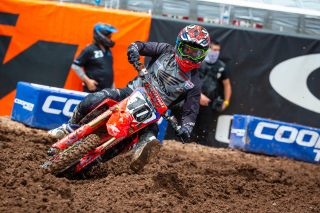 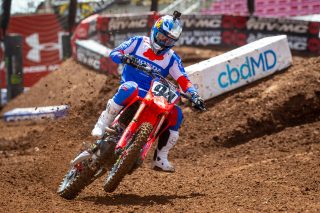 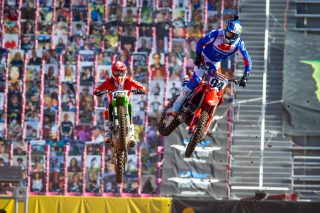 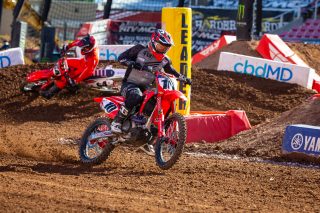 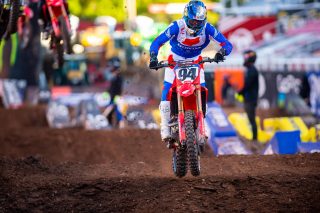 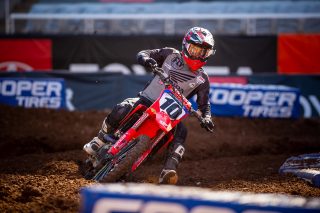 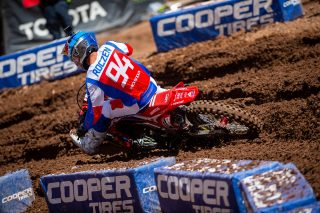 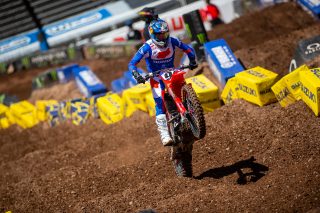 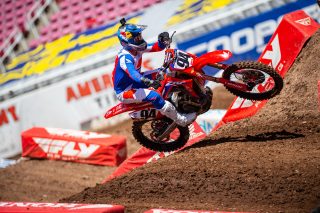 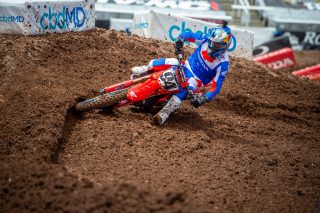 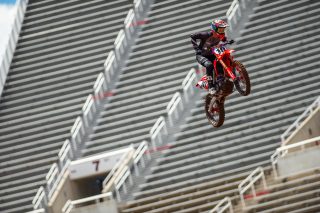 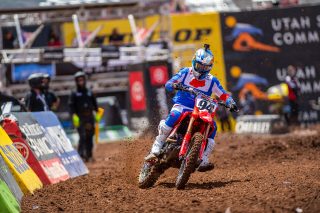 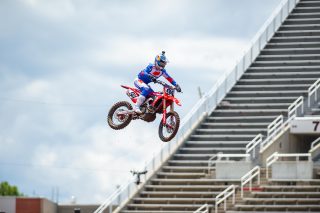 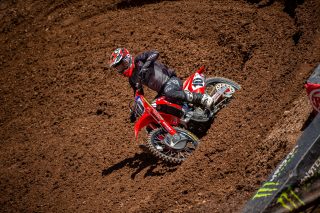 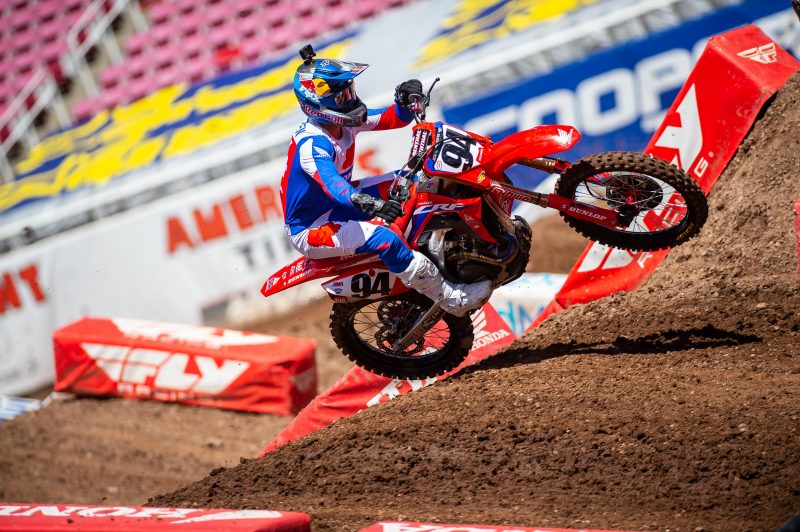