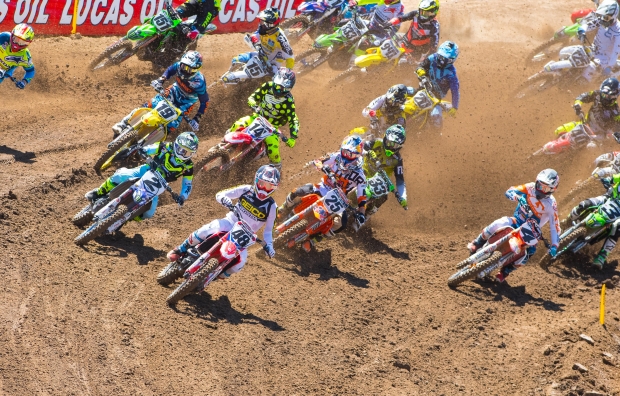 The opening round of the AMA Pro Motocross Championship, held in Rancho Cordova, California, featured highs and lows for Team Honda HRC, as riders Cole Seely and Christian Craig put together solid first-moto performances before struggling in the day’s second race to finish eighth and 12th overall, respectively.

In the first moto, Craig took the holeshot and early lead his CRF450R, while Seely was seventh. Unfortunately, Craig fell on the second lap and remounted outside the top 10. Both riders began battling forward, with Seely moving into fourth on lap 7 and maintaining that position to the checkered flag. Craig was able to regain a few spots, crossing the finish line in ninth. In moto two, Seely and Craig got off the line to less-than-desirable starts, both sitting outside the top 15. The Red Riders worked their way past multiple people during the opening laps, but they lost momentum and ended up 12th and 14th.

Although his focus is on his recovery, Team Honda HRC rider Ken Roczen joined his squad at the Hangtown season opener. This marks the second race Roczen has attended since his season-ending injury at the Anaheim 2 Supercross, and fans and industry members alike were excited to see him. The German was kept busy, signing autographs under the Team Honda HRC tent before doing a meet-and-greet with FOX special guests, then giving an interview on the podium during opening ceremonies. Before the gate dropped for the first 450 moto, Roczen also interviewed with Georgia Albertson on MavTV, providing an update on his recovery.

“I’m keeping positive for sure,” Roczen said. “Things could’ve been a lot worse, so I’m grateful to be standing here on my two legs. This is the longest I’ve been off the bike in my entire career and we’re probably only halfway through it, which is crazy but I’m confident I’ll be back. My arm is a work in progress, but things are going well and I’m doing physical therapy pretty much seven days a week. I actually have my physical therapist living in my guesthouse. I feel a lot better though, now that all the surgeries are over, and I’ve been getting back into a good routine of eating healthy and working out—I even went for a run this morning. It’s good to see my team and fans but honestly, it’s torture being here at the race because I know I should be out there winning. I’ll be back and we’ll be seeing that number-one plate on the Honda again.”

“It was great to have Kenny at the race today,” team manager Dan Betley said. “It’s been since Daytona that we all saw him last. He just has so much energy and this aura that he brings with him, it’s exciting to have him around. I think for the whole team’s sake, to see that he’s on the mend, and in my mind almost ahead of schedule, is great. It was a devastating injury so to see how far he’s come in a short time and to hear his positivity makes me really happy for him.”

The team had Roczen’s bike on display, with the reigning champion’s No. 1 on red backgrounds. “It’s bittersweet knowing that Honda didn’t necessarily earn that plate, but Kenny did and that’s what he would’ve ridden with,” Betley added. “It was cool seeing it on our bike and I believe that we’ll see it again in the future.”

The day started off pretty good. I qualified 10th overall and was confident going into the motos. I ended up getting the holeshot in the first moto and led for a couple laps before cross-rutting and going down. I was able to get up pretty fast, probably around 14th. I made some good passes throughout the moto to come back to ninth, so I was happy with my riding other than the fall. I was trying to find a flow in the second moto, but with the heat I didn't have much energy left in me. I made some mistakes and lost some positions. Midway through the moto something in my back popped and I wasn't able to sit down without it taking my breath away, so that made everything harder. I’m not happy with the end result but I showed some good speed and know I can run with the top guys. There are 22 motos left to go and I'm looking forward to improving every weekend. 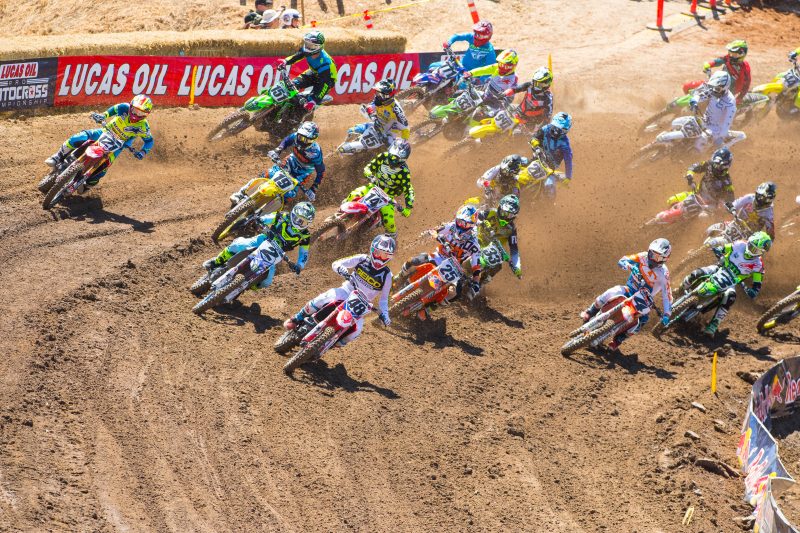