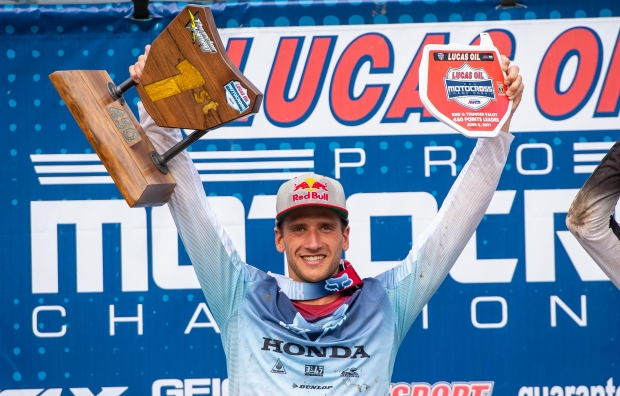 One week after a strong showing at the AMA Pro Motocross opener, Team Honda HRC had an even better weekend at Lakewood, Colorado’s Thunder Valley National, with Ken Roczen turning in a flawless 1-1 moto tally to notch the 450 overall win. The German was capably backed up by his teammates, with brothers Jett and Hunter Lawrence finishing second and third, respectively, in the 250 class, while Chase Sexton overcame a poor 450 moto 2 start to notch sixth overall. Between them, Roczen and Jett Lawrence won three of the day’s four motos, and each assumed sole possession of the lead in his class’s title chase.

Having set the fastest 450 lap time in qualifying, Roczen exited turn 1 fourth in moto 1, then quickly advanced to third, made another pass for second, and took control of the lead–all on the opening lap. Although the German lost ground in the middle portion of the race–Adam Cianciarulo got by on lap 6 of 16, and Dylan Ferrandis did likewise four laps later–Roczen rallied to retake the lead three laps from the end, then carried it home for an impressive moto win. In the second moto, Roczen was untouchable from the start aboard his CRF450R, quickly taking the top spot from Cooper Webb and never looking back, earning his third straight moto win, this time with a 8.9 second margin. Teammate Chase Sexton completed the first 450 moto in fourth place but suffered a subpar moto 2 start, finishing the opening lap in 13th place. Undaunted, he charged forward to a fifth-place finish for sixth overall.

In 250 racing, Jett Lawrence and title rival Jeremy Martin were at the front of the pack following the first gate drop, but unfortunately the race was red flagged for a downed rider. On the restart, Jett and Hunter Lawrence battled for third before ultimately finishing fourth and fifth, respectively. The start of the second 250 moto saw Jett and Justin Cooper battling for the lead, with Hunter not far behind in third. With 20 minutes remaining, Jett made a strong pass on Cooper for the lead. The young Australian pulled away, eventually taking his second moto win of the season by over 15 seconds, for second overall. Although Hunter had a minor crash in the second moto, he didn’t lose much time and continued on for third in the moto and overall, marking the third AMA Pro Motocross podium result of his career.

“I honestly don't know what to say. We haven't had a perfect weekend like this in a long time. The team and I have done some work this week with suspension, but it just isn't proven until we race, feel comfortable and get some good finishes. I had the pole position today and won both practices to go into the first moto. We had a great, great battle with Adam [Cianciarulo] and Dylan [Ferrandis] in the first moto, and I was able to be aggressive in the end and clinch that win. That was huge for us; I was really happy with that and felt strong in the end. I tried to get as much recovery as possible between the motos, and honestly, it was really nice before the second moto with the cloud cover—perfect conditions. I really liked how they didn't go too deep with the tilling on the track, because it allowed us to move around and pretty much use the entire track. I had a lot of fun out there. This track just really suits my style and we ended up going 1-1. It was an incredible day. I was bummed that my family couldn't be here, but so stoked for my team and myself. It’s just what we needed. It seems like we're hitting our stride right now and it’s also good to go into an off-weekend.”

“I had high hopes coming into today after last weekend. It started off rough in the first and second practices. In the first moto, I rode okay and finished fourth, but overall didn't ride to my potential. In the second moto, I actually rode well, but started last again; I made a bonehead move and started in second gear like normal [instead of first for the high elevation]. I had to ride as hard as I could from there on and finished fifth. Overall, it wasn't the day I wanted, going 4-5, but we're back in two weeks and I'm looking forward to High Point. I really like that track and I'm excited to go back to the East Coast."

"Not a bad weekend; not really anything to jump up and down about, but pretty happy with the fact that 5-3 moto scores landed us third overall. I was happy with the start in the second moto. That was really good; especially with the altitude it can be tough with the horsepower, so we got a really good start and perfected that. Obviously the crash wasn't ideal, but we got up and regrouped really well and were able to make a solid push all the way through to the end, staying in third. I'm happy to be leaving unscathed, fit and healthy, and ready to fight at High Point. We know what we have to work on and will just keep grinding away and get where we want to be." 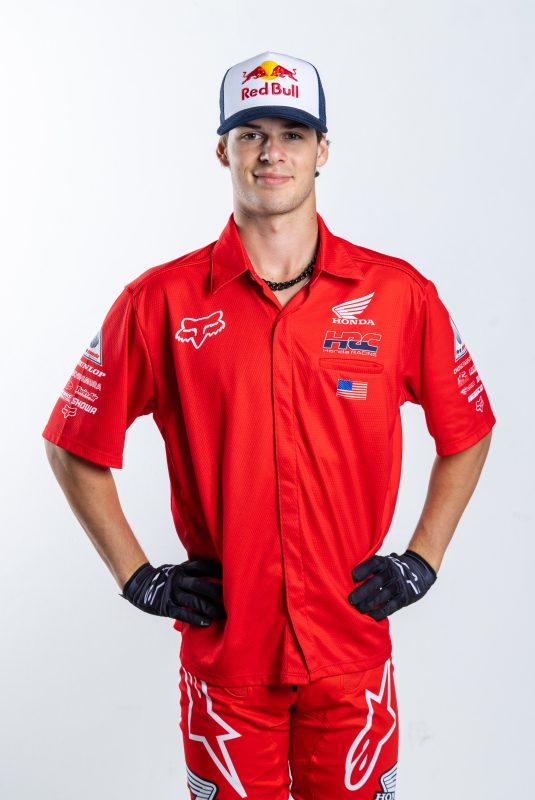 "Colorado was a bit of an up-and-down day. In qualifying, [Justin] Cooper crushed us, going 2'05”. Then in the first moto, I got a really good first start with second behind J-Mart [Jeremy Martin]. We ended up having a red flag and the next start wasn't so good. I was in fourth, and the boys were just way faster than me in the first moto. I just had to make sure to put my head down in the second moto and give it to them. I got a really good start. Justin was in front of me and we had a really good battle in the first few laps, going back and forth; I had a lot of fun with that. I knew if I could get him and kind of crack him a little bit, he would feel like he was going to make a mistake, but he made it hard for me and it was fun. I had a lot of fun in that race and it was good racing with Justin. Hopefully we can just keep this going in the next few rounds and maybe click off some more overall wins."

“The entire team did a great job preparing for this high-altitude event in Lakewood, Colorado. After a few adjustments early in the day, Jett and Hunter rode hard to finish second and third overall. Jett’s second-moto win helped him secure the red plate going into the next round. Ken showed his determination and speed all day, beginning with qualifying first in the morning. His consistent starts put him in a good position to ride his own race and win both motos! His consistency paid off, earning him the red plate as well. Chase showed good speed today as well, but inconsistent starts hurt his chances of earning a podium spot. His second-moto start had him finish lap 1 in 13th place, but he moved up through the pack to finish fifth in moto 2, earning sixth overall for the day.” 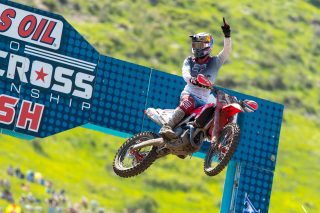 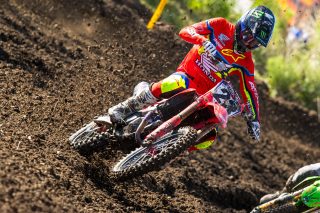 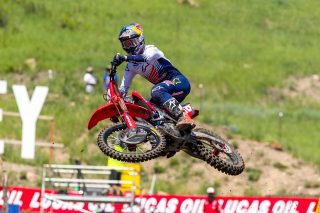 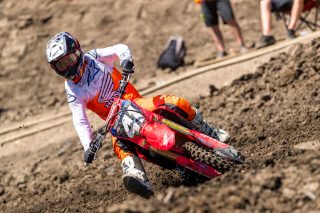 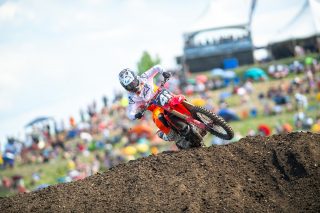 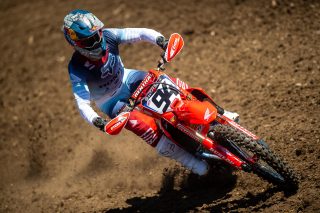 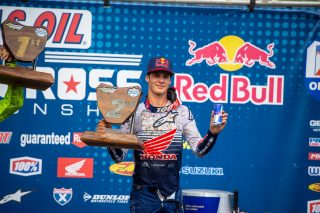 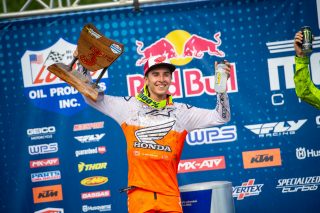 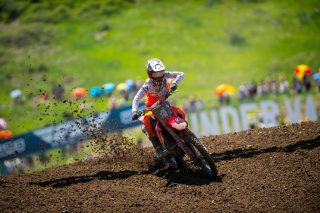 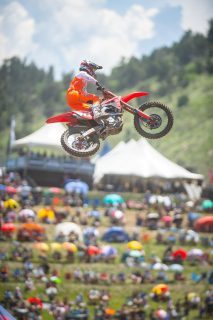 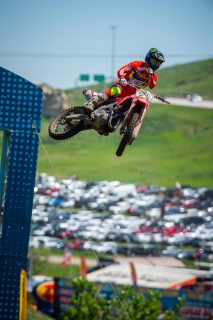 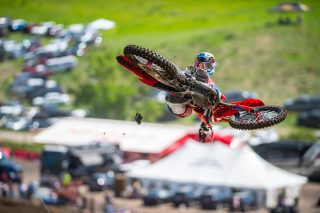 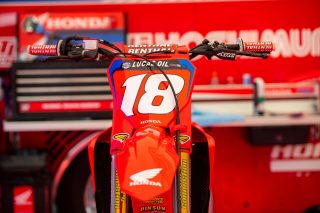 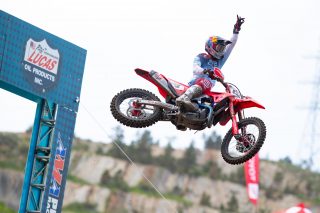 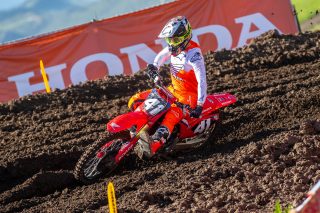 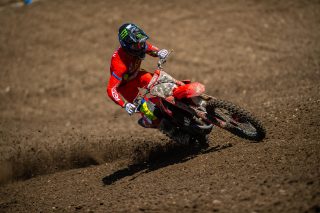 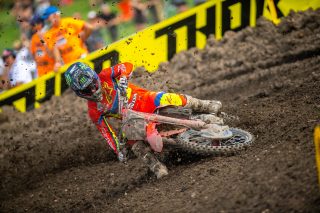 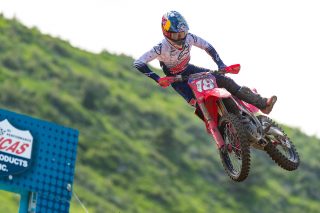 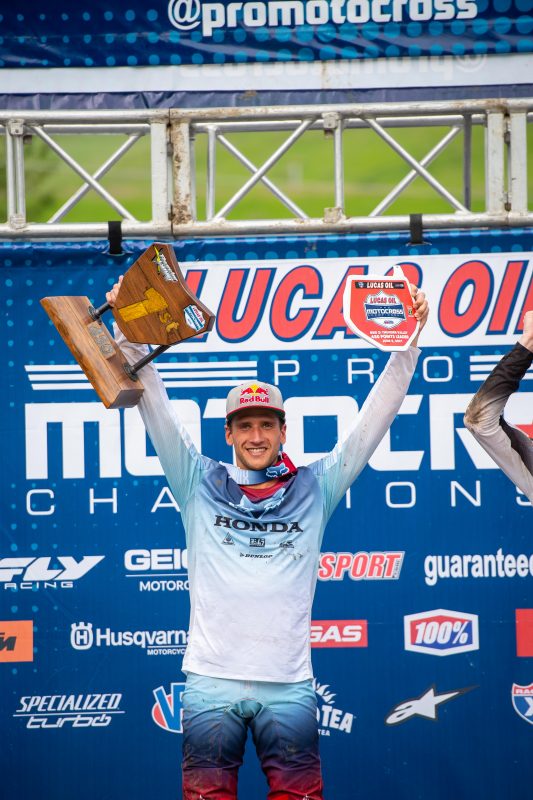