Round 13 of the AMA Supercross series, in Indianapolis, saw Team Honda HRC’s Trey Canard secure his best result of the season, as he finished the night in fourth. Following a decent start, the Oklahoman made quick work of the riders in front of him, advancing to fifth by the completion of the opening lap. Taking advantage of another rider’s mistake, Canard moved into fourth on lap 12, which is where he would finish.

Prior to Saturday’s gate drop, Team Honda HRC’s Trey Canard and GEICO Honda’s RJ Hampshire took part in a go-kart showdown with Honda Performance Development (HPD) backed IndyCar drivers Alexander Rossi and Conor Daly, at K1 Speed in Fishers, Indiana. The grand prix-style event included a practice session, timed qualifying and main-event race, with time in between each for fans to get autographs with their favorite Honda-backed athlete. The next day, both automobile racers joined Team Honda HRC to get an inside look at a supercross event.

“Friday’s event was a great experience and it was awesome to meet Conor and Alexander,” Canard said. “I definitely think they went easy on us and let us win, but either way it was a lot of fun to get out there and race with them. Even though IndyCar and supercross are totally different worlds, there are actually a lot of similarities between them, so it was cool to get their take on things. Having them join us at the race was great too and hopefully someday I can make it to an IndyCar race.”

The car drivers enjoyed the event as well. “It was very cool to be on track with Trey and RJ and have the Honda family together for the afternoon to mix two different disciplines of motorsports in one place,” Rossi said. “It was a lot of fun and great for fans to be able to come out and experience it with us.”

“I’ve been a fan for a long time,” Daly added, “so to get to experience the behind-the-scenes of race day was awesome. It’s amazing to see all that goes into it and the amount of preparation the team and riders put into each weekend. I watched film with Trey after the last practice, so I got to see what he’s evaluating. We got to go down and walk the track, which I’ve never had the opportunity to do, and it was unreal to see it from that perspective. The amount of talent it takes to ride that is crazy.”

Although tonight was my best finish of the season, it’s still disappointing not being on the podium. You have to take the small victories where you can though, and just improve from there. We’re getting closer. I was in a better position in the main event than I’ve been in a few races so that was nice. I made a pretty big mistake right when [Jason] Anderson got by me and lost him. At that point it was pretty much survival to the end. I just have to go home, keep working and believe in myself. 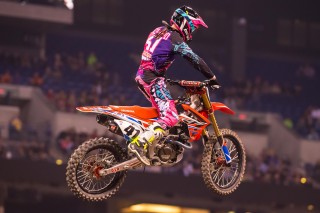 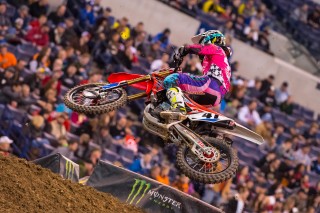 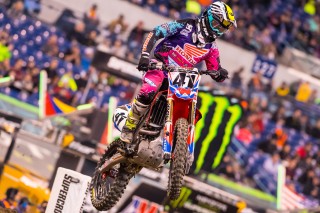