Although the overall result wasn’t what had been hoped for, Team Honda HRC was pleased with Trey Canard’s Monster Energy Cup performance and the potential for better things to come during the upcoming 2016 season. It seemed like déjà vu when the gate dropped for the evening’s first main event, with Canard launching his CRF450R off the line and taking the early lead. It was short-lived however, as he went down in a slick spot and fell, remounting near the back of the pack. Once back underway, Canard immediately began making passes and continued doing so through the remaining nine laps, ultimately taking the checkered flag in tenth. Canard got off the line to another good start in main event two and fought hard for a second-place finish. While battling for second in the third main, the Oklahoman suffered another crash, this time underneath the team managers’ tower. Once again, he put together an impressive come-from-behind performance but had to settle for 14th.

Team Honda HRC’s Cole Seely is still recovering from an operation on his right shoulder, which was injured during a dislocation that occurred in a July 18 practice crash at Spring Creek MX. The Californian was pleased to recently resume riding his mountain bike, and he has been working hard to stay in shape throughout his down time. The hope is to have Seely begin riding and preparing for the 2016 season on November 1.

“I’m about 10 or 12 weeks into the recovery process from my shoulder surgery so I’m hoping to be able to start riding pretty soon,” Seely explained. “I’ve been riding my road bike and recently my mountain bike, but I can’t wait to get my CRF on the track. Being at Monster Cup and not being able to line up on the gate is tough. I really miss racing and am ready to start focusing on 2016. I can’t wait to line up on the gate at Anaheim 1.”

After a successful 2015 Supercross season that saw him earn his first premier-class Supercross win, score numerous podium appearances and earn Rookie of the Year honors, Seely is looking forward to 2016. “Everyone who lines up on the gate is thinking about the championship, so that’s the ultimate goal for 2016, but I also want to work on being more consistent than last year,” he said. “I had never raced the entire series before last year, so it took me a while to make that adjustment. There were quite a few ups and downs, but now I know what to expect going into each race and am hoping to be on the podium every weekend. ”

“It was a tough day but I’m really happy with how I was riding. It’s always good to know you have the speed, especially coming back from injury. My starts were much better than they’ve been too, so that was also a big positive. The first race wasn’t bad really; I got a good start and was leading but my front end just slipped away from me and I wasn’t expecting it. I had a really bad gate position in the second moto but still got a decent start and was in fourth by the second lap. I was happy to get second. I had a pretty good start in the last race too and was trying to make a pass on Jason Anderson, and I’m not sure if he broke traction or what, but his back end came over on the finish-line jump and his rear tire hit my front wheel. I thought I was going to land on the tower—it was really scary. Somehow I ended up sliding almost underneath instead, but luckily I was okay. I got up and still felt really good the rest of the race; setting the fastest lap is cool and makes me excited for January.”

“We’re very pleased with the way Trey rode tonight even though he could not get the win. We could see improvement in the areas that we have been working on and his pace was very good all day with the top qualifying time and the fastest lap time of the race. We just need to refine a few more things and he should be ready to get better results at Anaheim 1.” 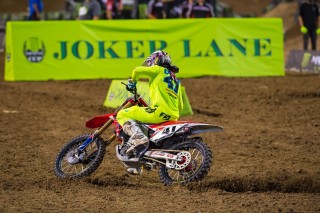 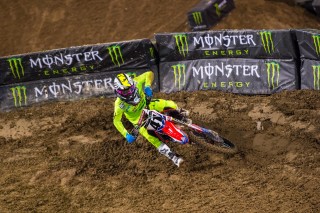 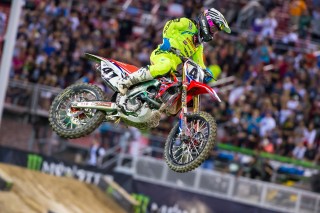 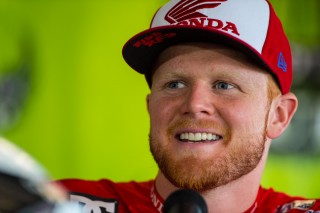 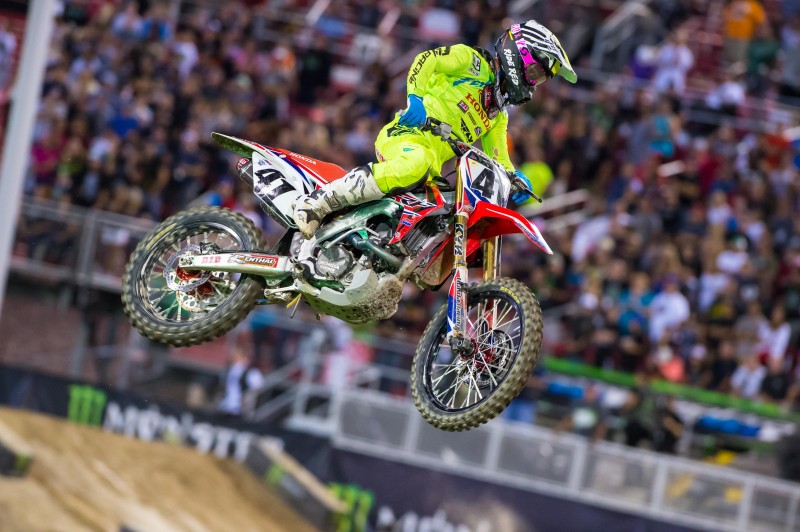