For Team Honda, the second of three 2015 stops at Angel Stadium of Anaheim was a rollercoaster of a night that saw both Trey Canard and Cole Seely involved in multiple encounters with other riders. Despite all the ups and downs, the team celebrated Seely’s best finish of the year so far.

During the season’s opening races, Seely had struggled to find his footing in the premier division but this weekend showed the Californian’s potential. Undeterred by a run-in with another rider mid-race, Seely kept his composure and was able to fight his way back through the field, crossing the finish line in sixth. Canard experienced his own challenges throughout the night, salvaging an 11th-place finish after he had clashes with Chad Reed during the main event. Meanwhile, GEICO Honda’s Eli Tomac backed up last week’s win with a third-place finish at Anaheim 2.

For the second time this year, 2006 MotoGP world champion Nicky Hayden paid a visit to Team Honda in the Anaheim pits. The Drive M7 Aspar rider lives in Kentucky but has a house near Angel Stadium where he stays while training during the winter, and he was attending the race with brother Roger and cousin Jake Lewis (both of whom are road racers in the new MotoAmerica series). “I always love to go and see one or two rounds when I can,” Hayden said. “Like any kind of motorcycle racing, Supercross is one of those sports that you really have to see live to get the full effect.”

Team Honda riders Trey Canard and Cole Seely had time for a quick chat with Hayden before the night program started, as did GEICO Honda’s Eli Tomac. “I try and watch any type of racing when I’m home and have time to sit on the couch,” Seely said afterward. “It’s cool to see guys like Nicky here. I’ve never actually been to a MotoGP race but I’d like to, because when I watch guys like him ride, I have a huge respect for everything they do and all the work that I’m sure goes into it. I imagine he feels the same way about our sport, so it’s cool to see him having our back when he’s in town.”

Having worked with Honda and HRC for the better part of his professional career, Hayden knows many of the team’s technicians and was curious to check out the race bikes. “I’m a fan of the sport but also the equipment, so it’s nice to go in the pits and get a little tour to see what’s new and geek out a bit on their technology,” he said. “Motorcycle racers speak a similar language, even though I’m on the asphalt and they’re on dirt.”

As a part of his training, Hayden has been riding dirt track in Southern California aboard a 2015 CRF450R, but with the MotoGP test season approaching, Anaheim 2 was the last supercross round he’ll be able to attend this year. Still, he says he’ll be pulling for Team Honda. “Honda had some success at the first couple of races, and it’s good to see the atmosphere in the truck. Hopefully they can keep it going.”

“All together, it was a frustrating night. Once again, I didn’t get the start I was hoping for, but I was riding well. I made some good passes and was working my way forward. I was behind Chad Reed, and when he went outside in that one corner, I figured he’d go outside again. I carried too much momentum and landed on him, going down really hard. I got back up and was adjusting my goggles when out of nowhere I got hit and crashed again. I tried to get it together at the end, but it was too late to do much. It was a frustrating night, but I feel like I’m riding good and am healthy, so I’m thankful for that.” 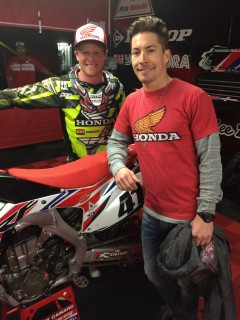 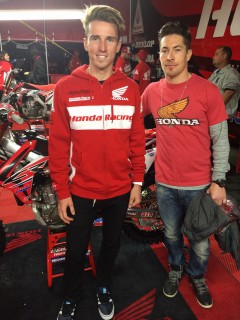 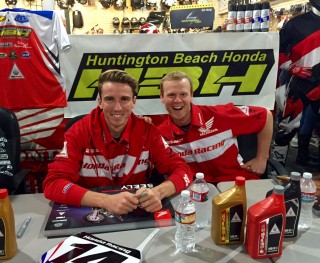 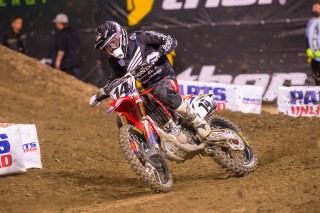 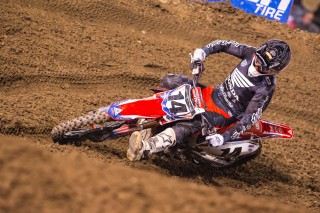 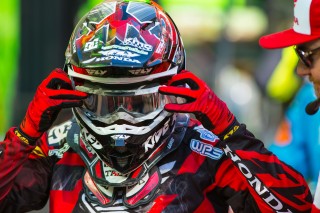 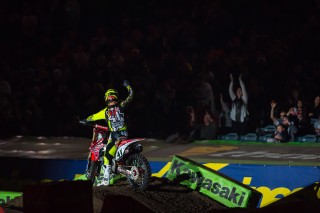 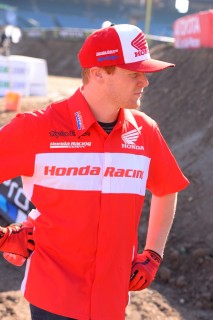 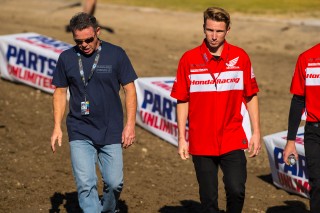 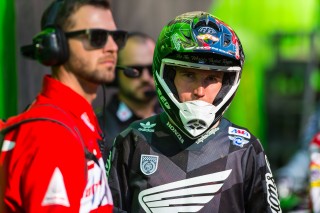 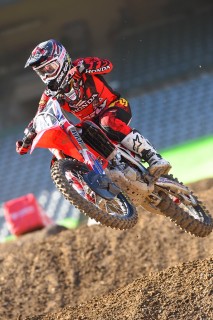 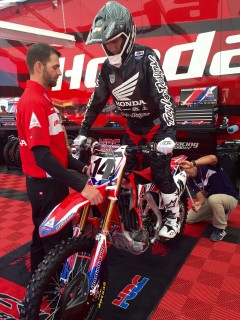 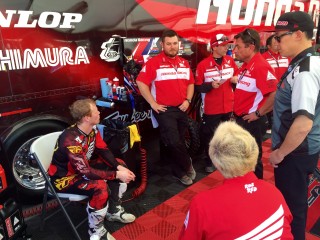 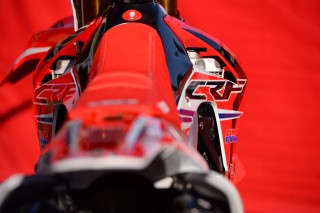 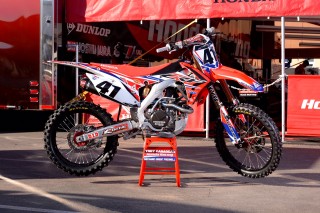 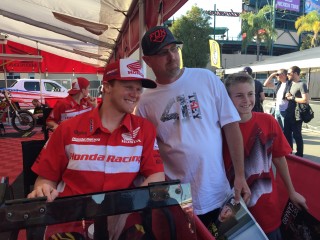 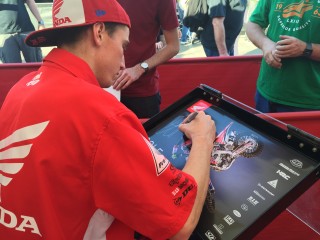 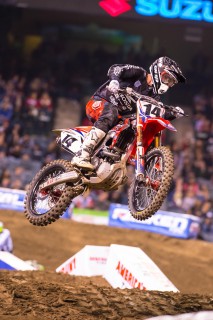 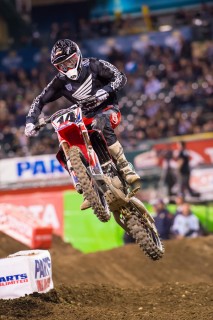 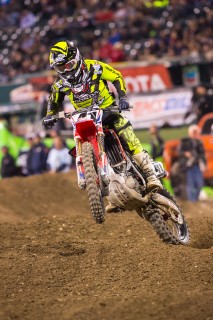 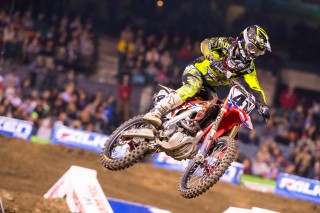 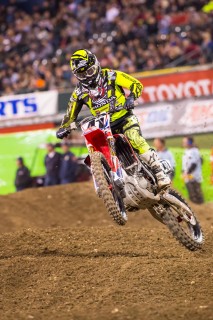 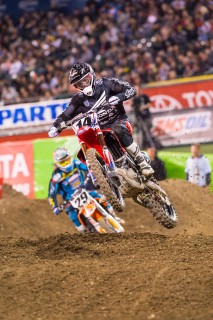 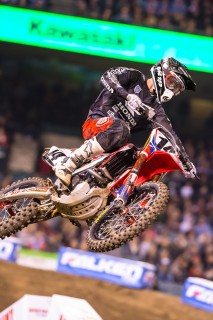 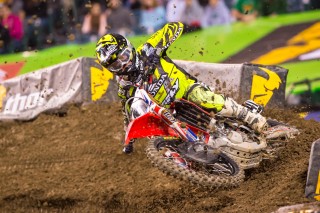 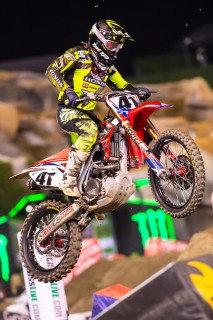 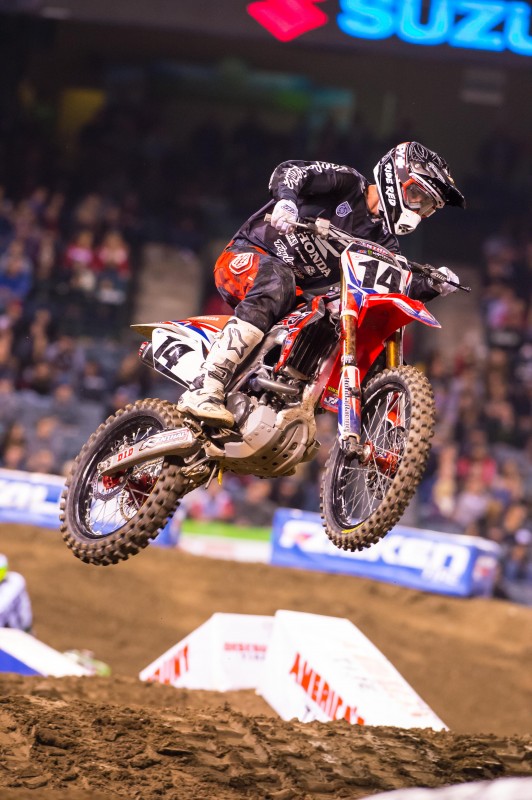