Team Honda kicked off the 2015 AMA Supercross series on a chilly evening at Angel Stadium of Anaheim, where they celebrated a solid podium finish by Trey Canard. The Oklahoman had an impressive showing, salvaging an eighth-place start in the main event by advancing to third place by the midway point. With a long season ahead of him, the 450-class veteran rode smart, maintaining the position to the end and confirming his status as a title contender.

Meanwhile, Cole Seely’s first full race as an official member of Team Honda didn’t go as planned, as bad luck and untimely falls held him to 14th place at night’s end. Nevertheless, the Californian learned some positive lessons and looks forward to improving on the performance as the season advances.

Although Southern California is known for its warm weather, it’s not unusual for Supercross races at Angel Stadium of Anaheim to take place in relatively chilly conditions. This year, the region was visited by cold weather during the week ahead of the race, and the nearby Inland Empire was even hit by snow just before the New Year. (Team Honda’s test track was spared by the storm, but at any rate, no outings had been scheduled. “By that point, we were already finished with testing,” Honda Team Manager Dan Betley said.)

The trend continued on race day, with early-morning temperatures touching 39º F to match the city’s historic low for the day. When not on the track, many riders stayed bundled up during the day program, and although the mercury climbed as high as 63º at one point, it was back down to the mid-50s in time for the opening ceremonies and the mid-40s by the time the show was finished.

“We’ve actually been riding in the cold lately because of how chilly it’s been, so we were prepared,” said Cole Seely’s mechanic, Rich Simmons, whose thoughts were echoed by his counterpart for Trey Canard. “Bike-wise, the temperature doesn’t really affect us much,” said Brent Presnell. “Really, we just try to keep the guys warm throughout the day. The biggest thing is actually traction. As the air gets colder during the course of the evening, moisture comes up and the track gets slicker, so they just have to watch out for that.”

While many riders wore jackets on the aptly named warm-up lap, most reported that they didn’t notice the cold while they were racing. “I actually enjoy riding in the cold weather,” Seely said. “Maybe I’m a bit hot-blooded, because I struggle more when we get in the heat and humidity of the East Coast. I prefer the cold, dry California air.”

“I’m happy, because other than the starts, the night went really well. I thought I rode well, and although I had to roll the triple once, I missed some carnage around me and had no big crashes or drama. Starts are key, because we’re all going about the same speed. We’ll work on that for next week, but I don’t want to get lost or mess things up by doing too much different. I’m glad to get on the podium at the opener, and now I’ll come back ready for next week.” 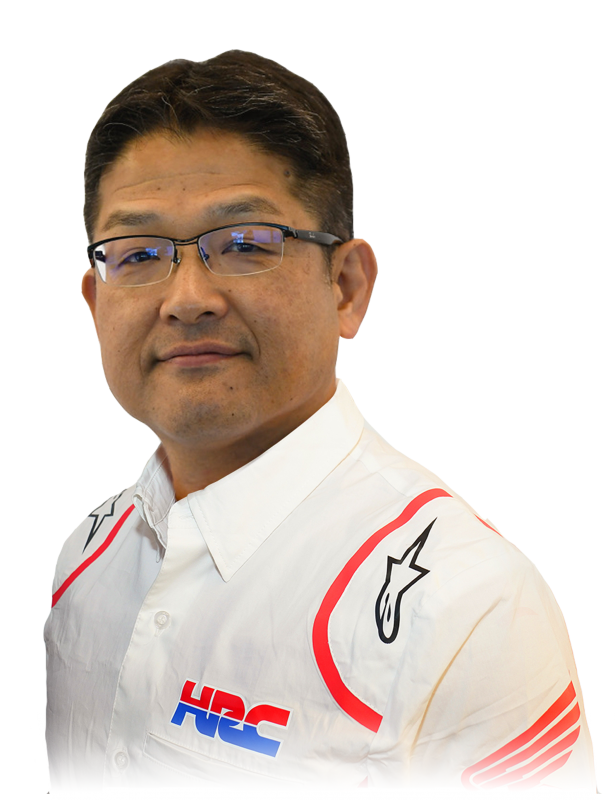 “Unfortunately, we weren’t able to win the first race of the season today. However, free practice and qualifying were good and we ultimately ended up on the podium, in third. We also found that our bike’s speed is very competitive, and those things give us encouragement. In fact, it has been a long time since the last AMA race with HRC involved, so this result is not bad. I think we will be able to continue this positive feeling for the next race as well. Please keep cheering for Team Honda and HRC!” 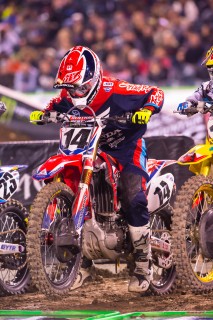 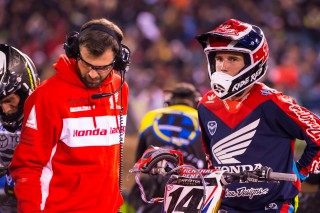 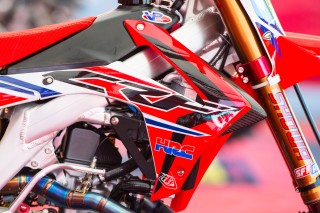 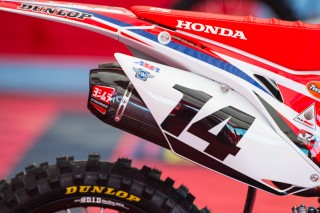 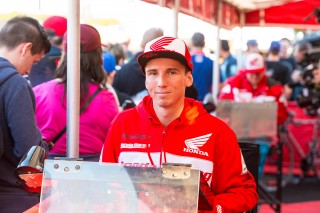 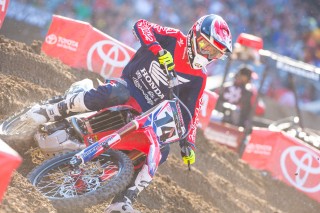 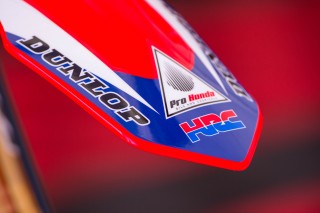 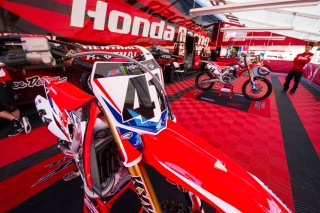 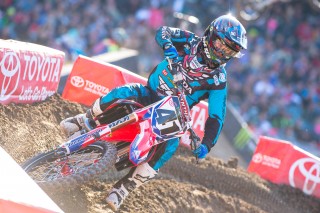 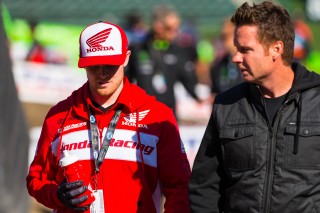 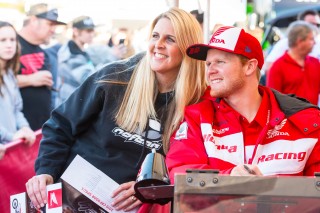 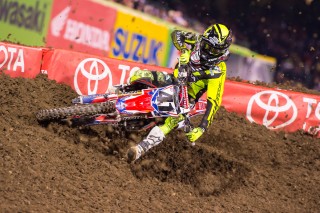 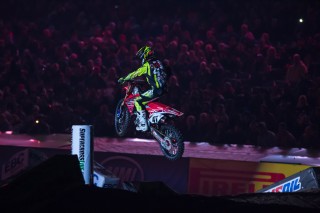 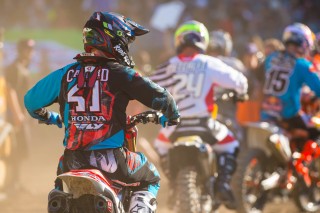 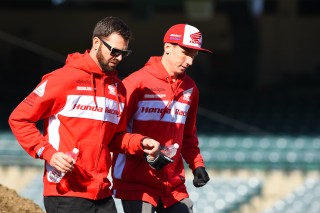 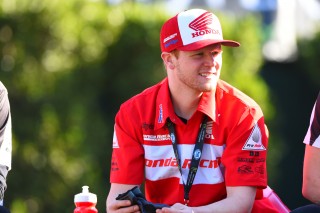 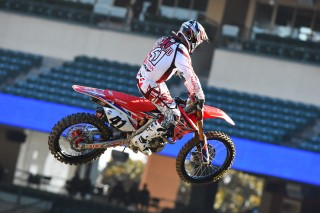 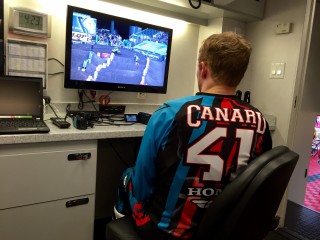 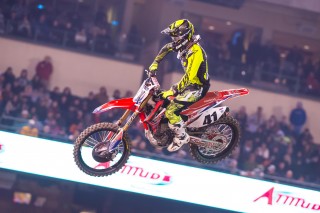 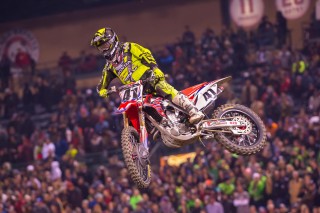 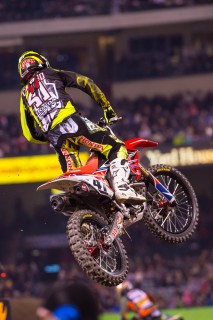 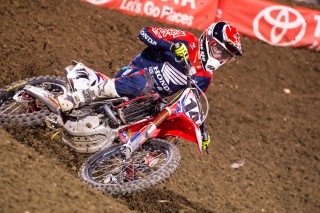 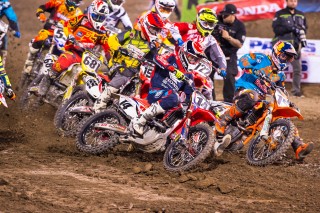 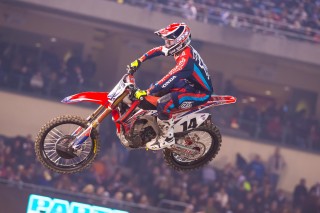 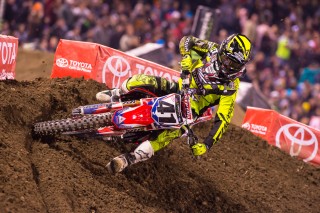 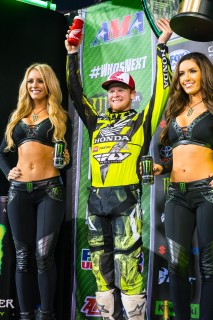