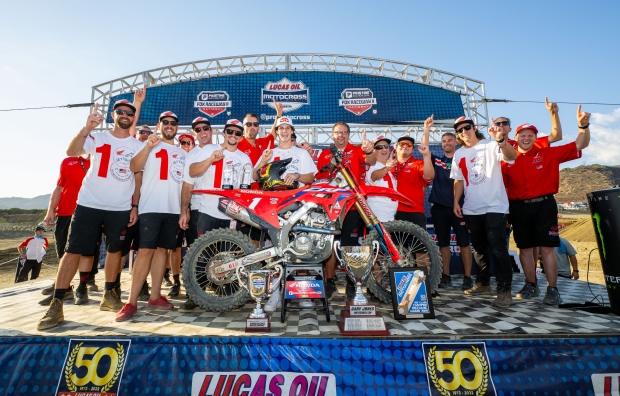 PALA, Calif. (September 3, 2022) —Today during the 2022 AMA Pro Motocross Championship finale at Fox Raceway, Team Honda HRC rider Jett Lawrence wrapped up his second consecutive 250 class National Championship. In addition, Honda won the 2022 AMA Pro Motocross Manufacturer Championship, based on each brand’s top finishers in both classes at every round. (At least one Team Honda HRC rider was on the overall podium in both classes at every round this season.)

Over the course of the 2022 series, which saw racers complete 24 motos across 12 rounds, the Australian’s repeat title was never in serious doubt, as he rode his CRF250R to 11 moto wins and nine overall victories. Lawrence ended the season with a 45-point advantage over his nearest rival. For the second year in a row, Jett’s brother and Team Honda HRC colleague Hunter Lawrence also finished in the top three, having amassed three moto wins and nine overall-podium results.

The Lawrence brothers are natives of Landsborough, in Queensland, Australia, where Jett was a successful youth amateur racer before relocating to Europe for the 2016 German ADAC series and 85 European Motocross Championship, and later the 250 European Motocross series. His family moved to the U.S. in 2019, where he and Hunter raced for the Honda-backed Factory Connection team. In 2020 Jett took the Marty Smith Rookie of the Year Award, and last year the Lawrences moved up to the factory Team Honda HRC program, where Jett won his first National Championship, in the same class. Earlier this year, he took his first “indoor” title, the AMA Supercross East Region 250SX Championship.

“It’s awesome to get it done back-to-back. I’m definitely grateful,” Jett Lawrence said. “The team has been awesome this year. Honda brought out an awesome new CRF250R and I’m super pumped to be on it again in Supercross next year. I’m also excited to ride the 450 in Pro Motocross next summer. I definitely have a little work to do before battling with the top guys like Eli [Tomac] and Chase [Sexton]. It’s going to be fun, and I can’t wait.”

Following the race, Jett Lawrence was presented with the Gary Jones Cup—the award that goes to the winner of the 250 championship. Team Honda HRC came extremely close to also adding the 450-class crown, as Chase Sexton earned nine moto wins and four overall wins aboard his CRF450R, in a historically competitive title fight that saw him finish just seven points behind Eli Tomac. Sexton’s teammate Ken Roczen also had a strong year, notching three podium-overall results, including a victory.

“It’s amazing to see how much Jett has matured as a racer since taking last year’s 250 crown,” said Bill Savino, Senior Manager of Customer Engagement at American Honda. “He was great in 2021, but this year, he dominated to such an extent that it was easy to forget he’s just 19 years old. His success says a lot about his abilities as a rider, the performance of his bike, and the effectiveness of the support structure we’ve built. We have an amazing group right now and I can’t adequately express how proud everyone at Honda is of Jett and the entire Honda HRC team—thank you. I’d also like to acknowledge Chase for an incredible season in the 450 class. While we weren’t able to get it done this time, I like our chances in 2023.”

“What a season for Jett!” said Brandon Wilson, Manager of Sports & Experiential at American Honda. “Winning his first supercross championship and taking his second-straight motocross championship speaks volumes about his talent. We also couldn’t be prouder or more appreciative of the race-team staff and the riders. This crew spends more time than most people can imagine ensuring that the riders have what they need to win. I’d also like to recognize Chase for the incredible progress he made this year. Even though we weren’t able to pull off the 450 championship this season, he has shown that he’s an elite talent. He’s riding like a seasoned veteran, and I know he’ll have a lot of success. Thanks also to Ken and Hunter for their important contributions to the team, on the track and off. It has been an amazing year, and we’re looking forward to even more success in 2023.”

“What an incredible year for the Lawrence brothers and the CRF250R!” said Team Manager Lars Lindstrom. “When you start with a new model there can be a lot of struggle to get the performance where it needs to be to win right away, and I couldn’t be prouder of our team and the effort they put in to do just that. This whole summer, we absolutely dominated the 250 class with Hunter and Jett, and I want to say a very big congratulations to Jett on taking home a second consecutive AMA Pro Motocross 250 Championship!”

Next up, Sexton and the Lawrences will all compete in the September 25 Motocross of Nations at Michigan’s RedBud MX (Sexton for Team USA and the brothers for Team Australia). 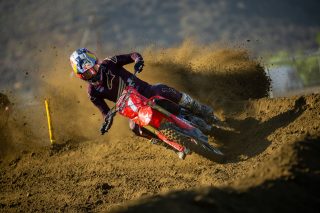 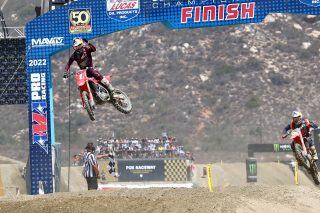 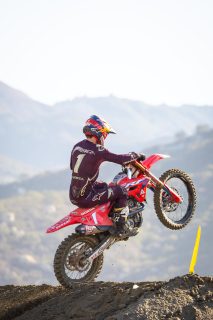 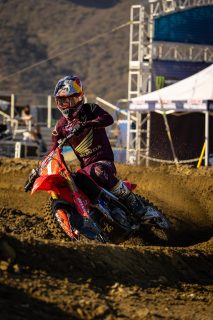 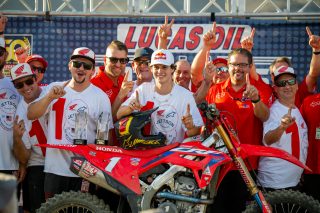 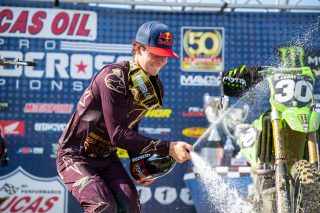 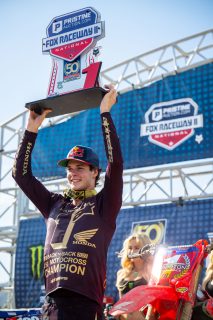 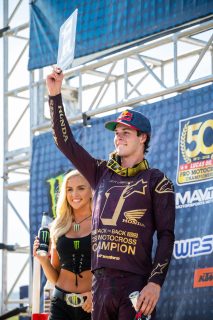 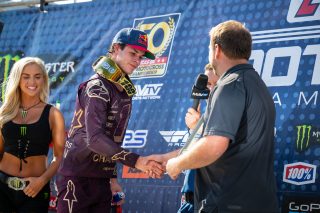 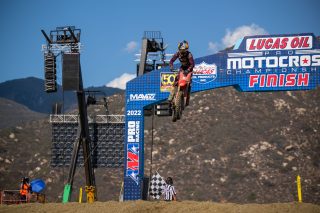 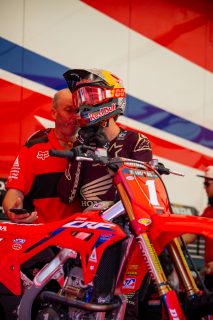 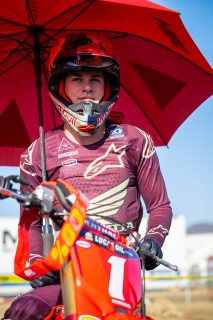 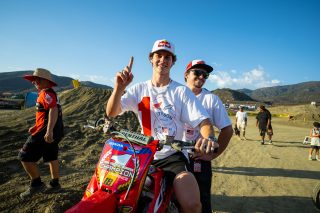 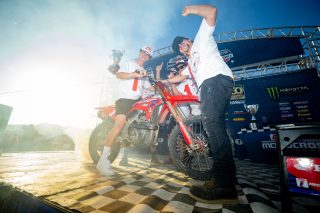 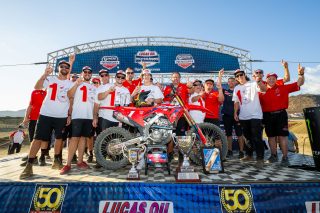 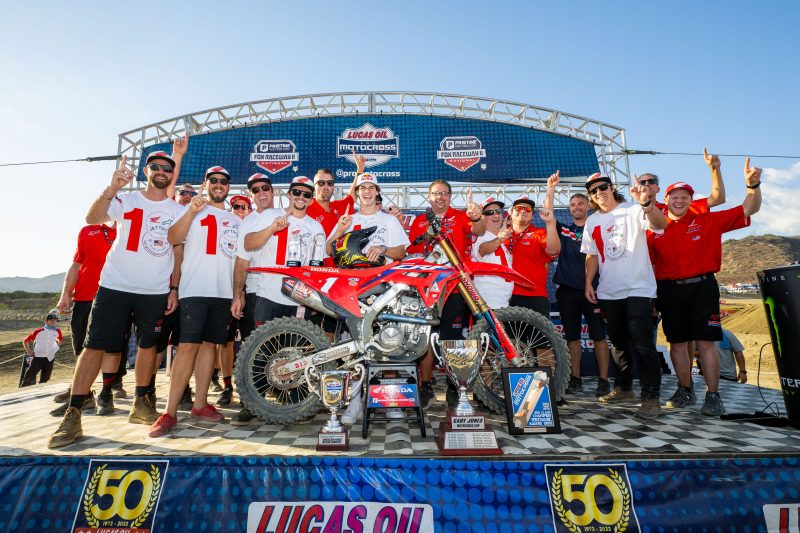